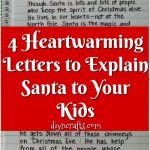 There comes a time in every parent’s life where they have to have the dreaded “talk”.

Before the birds and the bees comes the Santa talk.

A child will only believe in the jolly, pot-bellied, man for so long before their clever little brains start to see the impossibility of squeezing down every single chimney in the world within the ridiculously short timeframe.

How to Explain Santa to Kids

It’s a difficult subject to approach because you don’t want your children to think you’ve just been lying to them all this time; you want them to understand why you allowed them to believe in Santa in the first place.

Martha Brockenbrough has blessed us with a beautiful letter that she wrote to her daughter in 2009 regarding the truth behind the North Pole-dwelling gift giver.

Her daughter, Lucy, wrote a note—all in capitals for emphasis of course—reading, “I NEED TO KNOW, ARE YOU SANTA? TELL ME THE TRUTH.”

As an author of both adult and children’s books, Brockenbrough’s talents really shine through in this incredibly moving letter that offers her daughter an explanation without shattering the magic of Christmas.

Brockenbrough’s letter truly did inspire some as we have found another letter to “Ryan” doing the rounds on the Internet. The unknown authors of this letter have tweaked the above version a little; nevertheless, it’s still beautiful!

When Jo Walsh’s daughter was eight years old, she started questioning the existence of Santa.

Walsh remembered when she learnt the truth at age nine: she was angry at her mother and older sister for keeping that from her, and at the same time, she felt robbed.

Not wanting her own daughter to have the same negative experience, Walsh took inspiration from the letter above to craft her own explanation.

Jonathan Ryan Vassallo wrote a short story, Daddy, Is Santa Claus Real? , which consists mainly of a dialogue between a father and a son a few days before Christmas.

Although the father character, Mr. Bell, never really answered his son’s question, he got him to think and make his own decision on whether or not he wants to believe, and just what it means to believe.