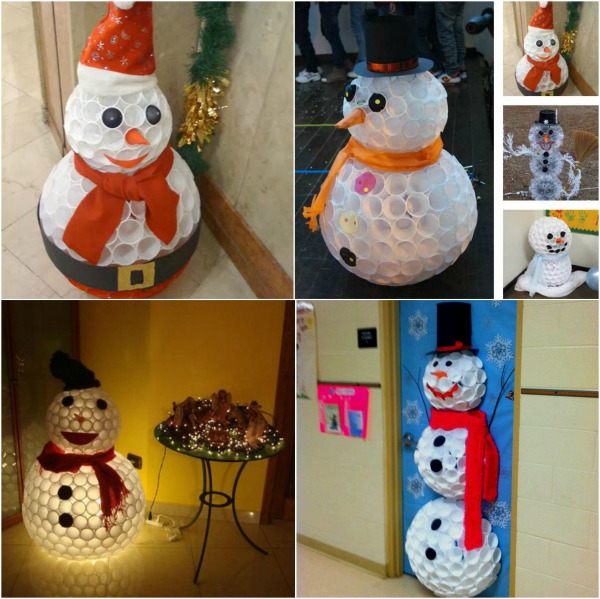 You don’t actually have to brave the cold and snow to make your own snowman, nor do you have to go out to buy a readymade decorational one if you can easily make your own at home. All you really need is some cheap white plastic cups, a stapler, some colored paper or cardboard, and that inevitable red Santa hat that we all have lying around. You could even make your own top hat if you don’t have one just by rolling a black piece of paper into a cylindrical shape, stapling it closed, and securing it to a round piece of the same paper.

Simply staple the cups side by side (openings facing outwards as if they were lying on their sides) to make a circular shape. Then continue to build this upwards until you have half a sphere. Repeat his to make another sphere and then staple the two together for the body. Do the same but smaller for the head. For the carrot nose you can just roll an orange piece of cardboard so that it makes a point, and for the eyes, just cut out two black circles. The outfit is up to you: you can make a little Santa outfit with the leftover paper, cut out traditional buttons, or drape it in some flashy tinsel.

This is a really fun, cute and easy-to-do DIY project, and it’s also a great one to get the kids involved in!