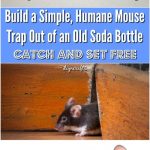 Thankfully I don’t have a lot of problems with pests around my house. The biggest problem where we live is mosquitoes, and I know exactly what to do about those. Ants can be a bother too, but again I have a solution.

Once in a while though a mouse or a rat manages to sneak in. Okay, I know a lot of people hate these furry little guys … but it’s been a long time since the bubonic plague was everywhere, and frankly I think they’re adorable. And even if I didn’t, I believe in being decent to animals and that’s that.

So I am loath to kill anything. But catching one of these guys without killing them? Very tough.

I just found an amazing video that solves the problem:

There are so many good things to say about this I don’t know where to begin! This is such a simple design; it works using physics and is just a really elegant solution. I admire the creativity that went into developing this. Because it is so simple, it is easy to build, even if you aren’t too handy.

You may be wondering whether the mouse will chew through the plastic. That’s a good question, but in this case the answer is probably “no.” Why? The curves of the surfaces make it very hard for the animal to find an edge to start chewing on. It just can’t open its mouth wide enough. Oh yeah—and by then you probably will have heard it anyway. You can then take it outdoors and release it.

Similar Project:  Hate Ironing? Who Doesn’t? De-Wrinkle Your Clothes in Your Dryer Instead!

This is such a fabulous invention! My hat is off to Chris Notap; I will definitely be checking out the rest of his channel!