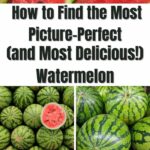 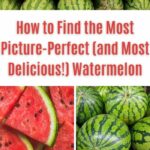 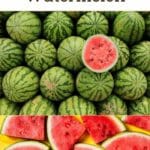 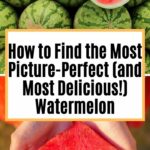 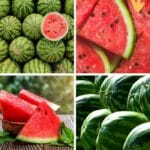 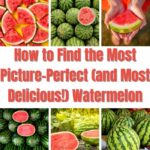 Nothing says summer quite like a ripe, juicy watermelon…

...but nothing ruins your afternoon faster than getting home with your grocery store or farmer’s market watermelon only to discover that it’s dry, bland, and otherwise unappetizing. 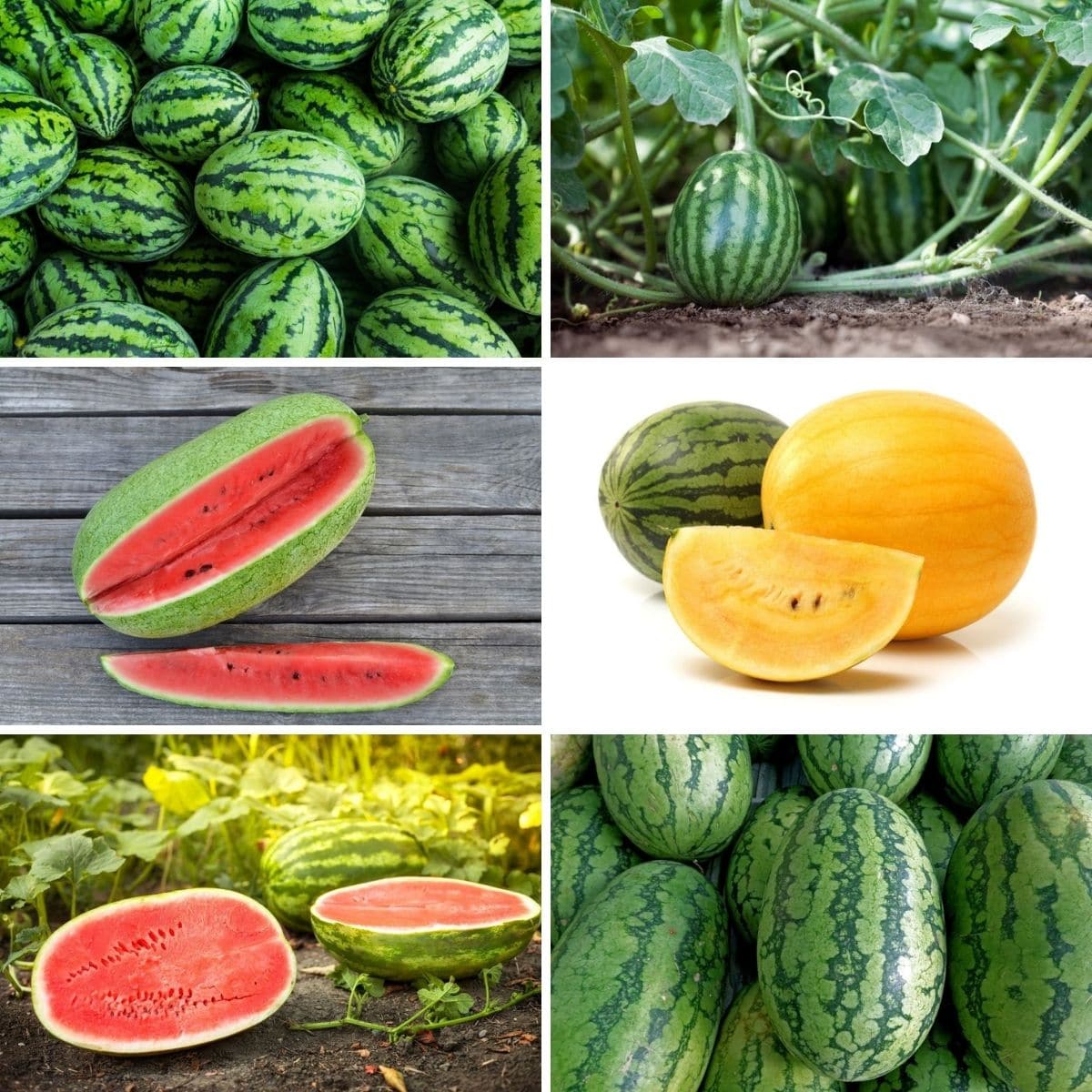 If you’ve ever spent more than five minutes thumping, poking, prodding, examining, or interrogating (just kidding...sort of!) watermelons at the store, you might wonder whether there’s an easier way to find a great piece of fruit.

Turns out, by following these twelve simple tips, you’ll be able to bring home the most delicious, picture-perfect watermelon each and every time. No guesswork required!

You may have been following all of the best gardening hacks and even followed our tips for making DIY organic fertilizer and building raised garden beds for cheap.  But, sometimes, the harvest doesn't turn out as good as you want.  With watermelons, it's not about just grabbing any melon and slicing it open.  There are several factors that create a delicious melon, and knowing how to pick which one is best is easier when you follow these tips! 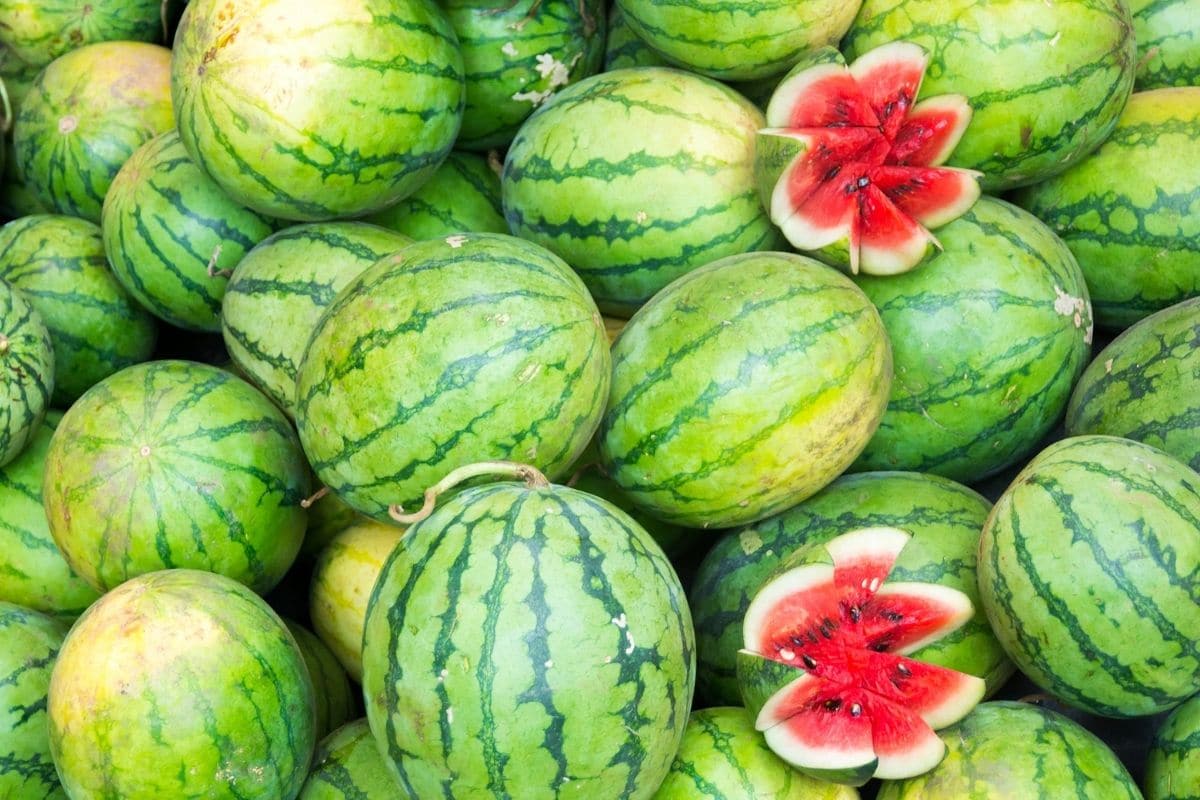 Unfortunately, watermelons aren’t like other fruits and vegetables - such as tomatoes - that can continue to ripen once they’re pulled from the vine. Once the melon has been pulled from the fields, that’s it.

Sadly, many farmers rush to get the watermelons to market and pick them a bit too soon. To avoid purchasing a watermelon that isn’t quite ready yet, consider looking at the bottom. A ripe watermelon will have a creamy patch with minimal tripping. The larger and darker the patch, the better.

This is a tough measure to evaluate, particularly if you're new to shopping for watermelons. You might have to lift a few different watermelons in order to adequately compare them.  Once you pick the right one, you can use it in one of these clever ways to serve watermelon.  So tasty! 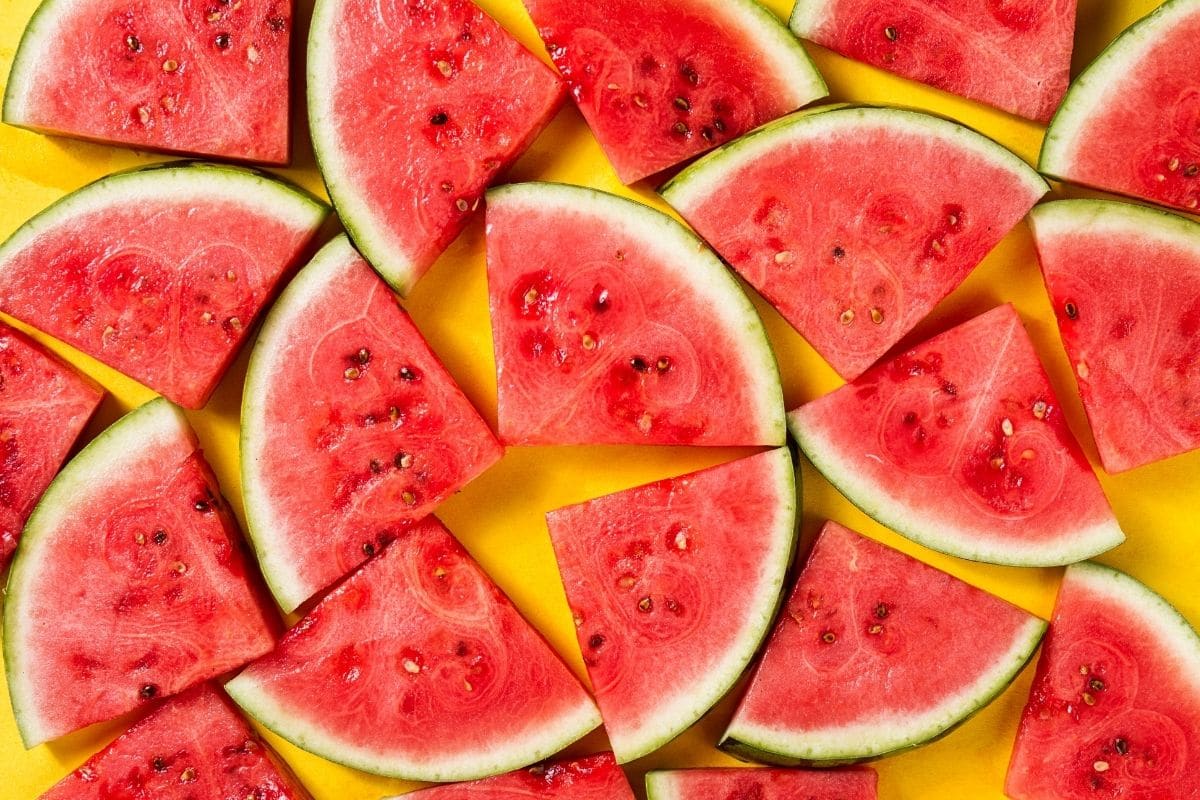 This might be the easiest way to tell if a watermelon is ripe, though it is by no means foolproof. Take a close look at your watermelon. A ripe watermelon will be dark green, while very light watermelons may indicate that they haven’t spent enough time on the vine. This can vary, of course, because some watermelon cultivars are simply lighter in color. Do your research!

However, most ripe watermelons will have stripes that are in contrasting shades of dark and light.

If you are growing your watermelons at home, then you may want to choose from a few different varieties of seeds.  Some popular options include: 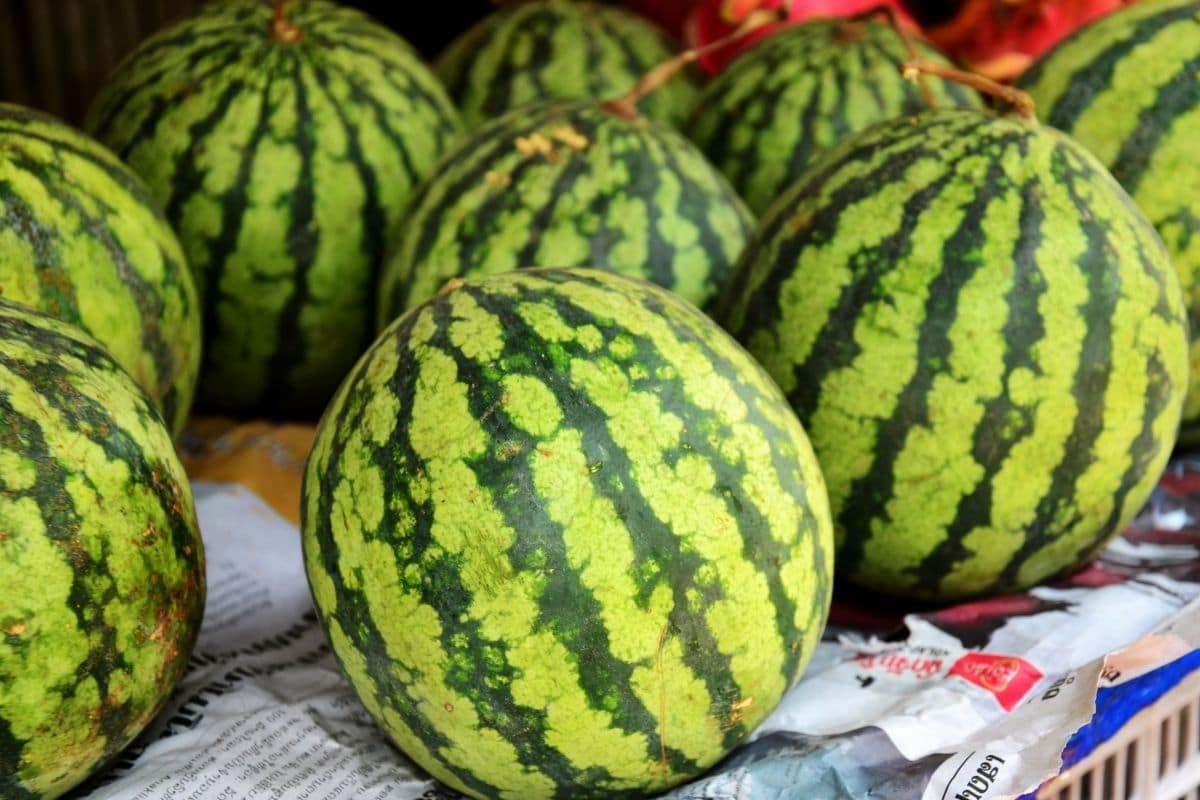 Although you’ll want to pay attention to the weight of the watermelon, particularly when compared to others, keep in mind that bigger isn’t always better. The best-tasting watermelons aren’t the behemoths but are instead simply the ones that are average-sized as compared to those around it. 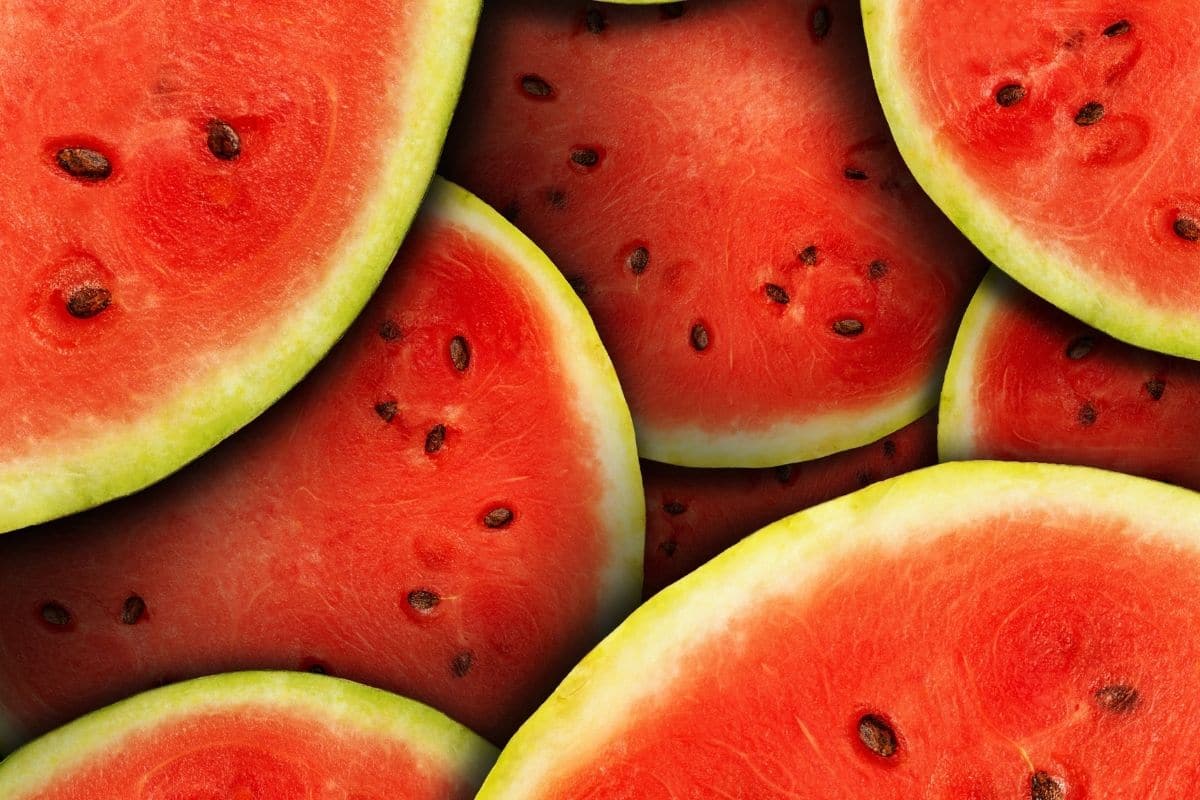 Check the firmness of the rind. A ripe watermelon will have a thick rind that doesn’t give out when it’s pressured. Rinds that are easy to puncture are generally overripe but can also be slightly underripe, too.

To tell if the rind is suitable, use your thumbnail to make a slight puncture in the rind of the melon. If it’s ripe, you shouldn’t be able to make much of an indentation.

6. Don’t Be Afraid of Some Webbing or Black Spots 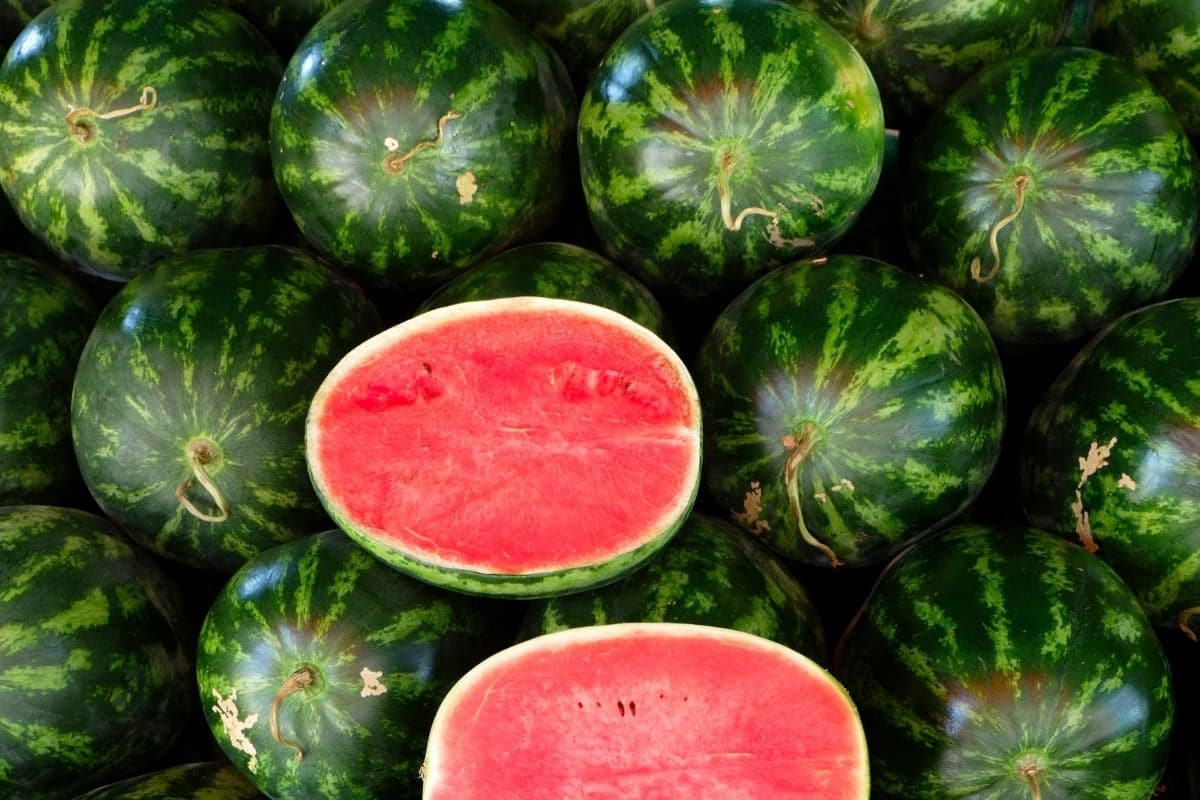 Unlike other kinds of fruits and vegetables, a bit of discoloration or black spots aren’t anything to worry about. In fact, if you see webbing on the outside of the watermelon's membrane, that’s actually a sign that the watermelon has been more adequately pollinated by bees. This can indicate a watermelon with a sweeter flavor.

Similarly, watermelon with black spots is one that has sugar seeping out - not rot or insect damage. It’s another good sign to look for!

7. Examine its Size and Shape 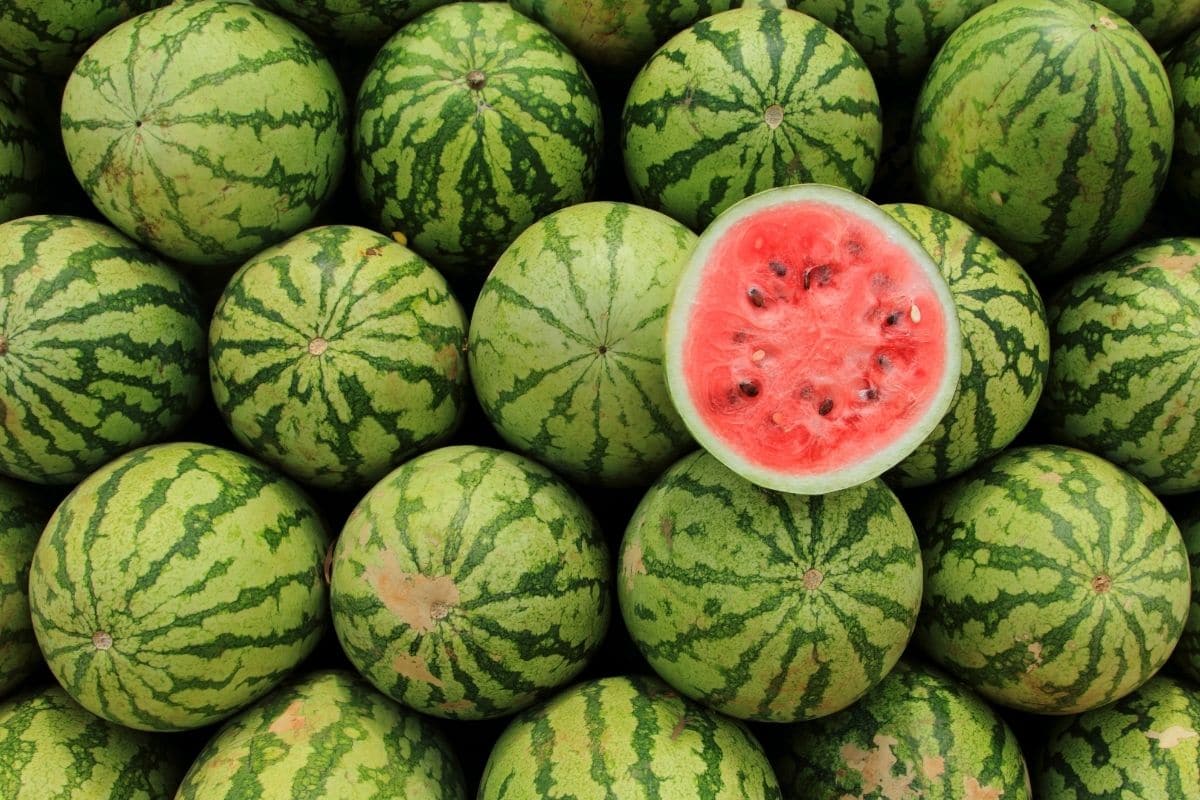 Look for one that is just about as symmetrical as can be. If your watermelon is riddled with lumps, bumps, indentations, or blemishes, there’s a good chance that it didn't receive enough water, sun, or nutrients to grow and ripen properly.

Once you pick the right watermelon, check out these tips for turning the watermelon into a basket! 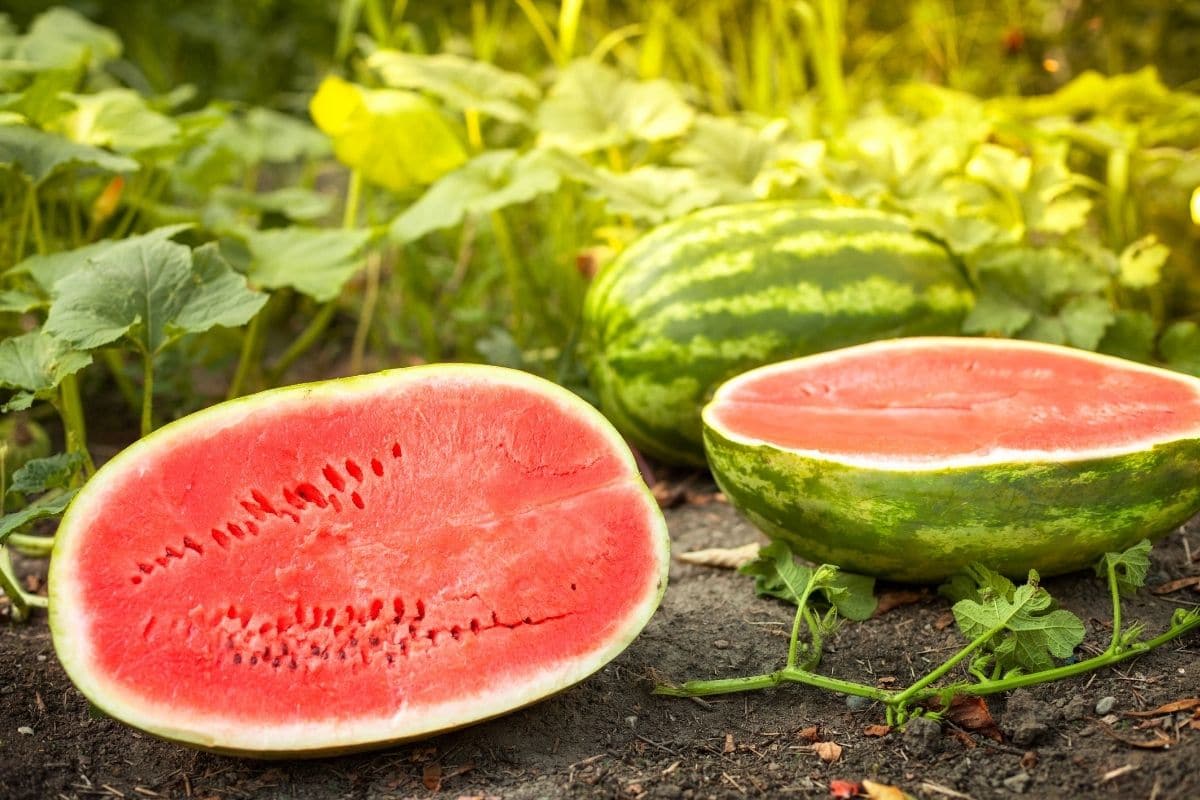 Does your watermelon have a stem? If so, you’re going to want to pass and pick another one. If a watermelon still has a stem attached, it means that it was not easily removed from the vine. Therefore, it wasn't ripe enough when harvested. Instead of a stem, your watermelon would have a slight indent where its stem fell off naturally, all on its own.

Similar Project:  10 Little-Known Ways to Use Milk in Your Garden 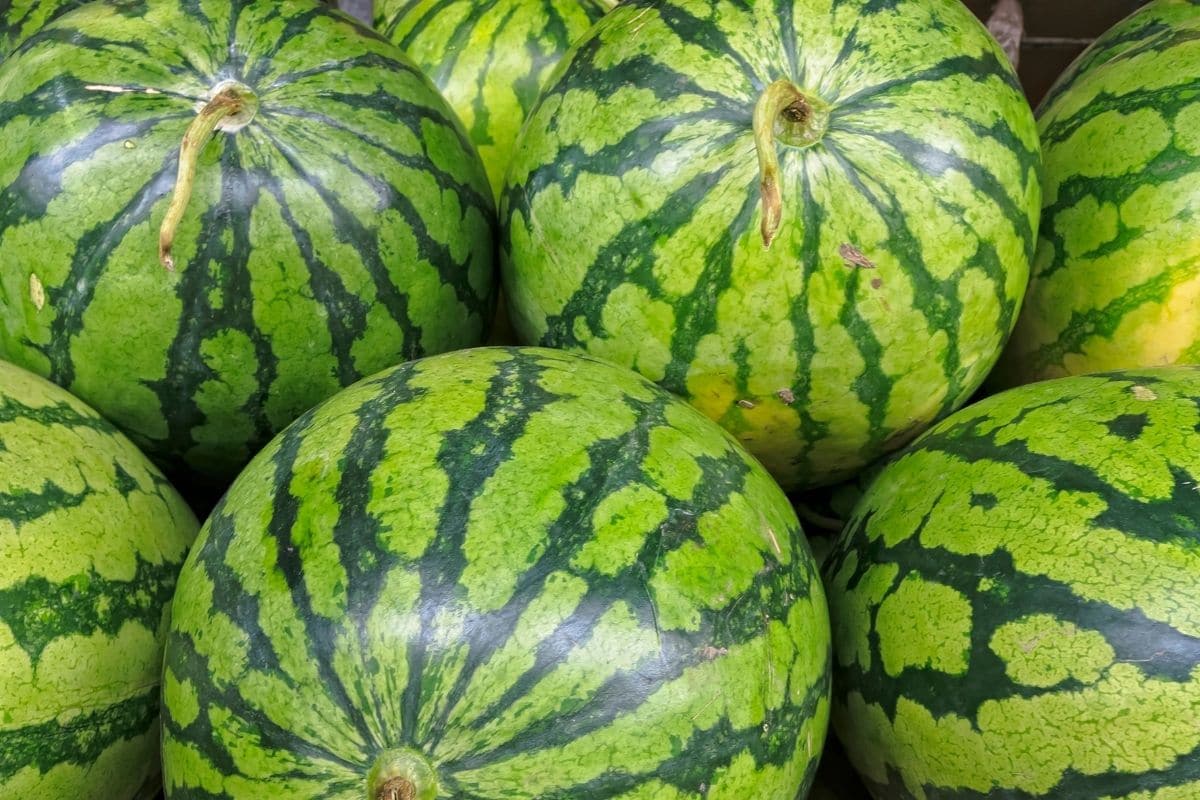 While a shiny watermelon might be pretty to look at, the unfortunate reality is that shiny watermelons are those that are not quite ripe enough yet. Skip these and keep moving. 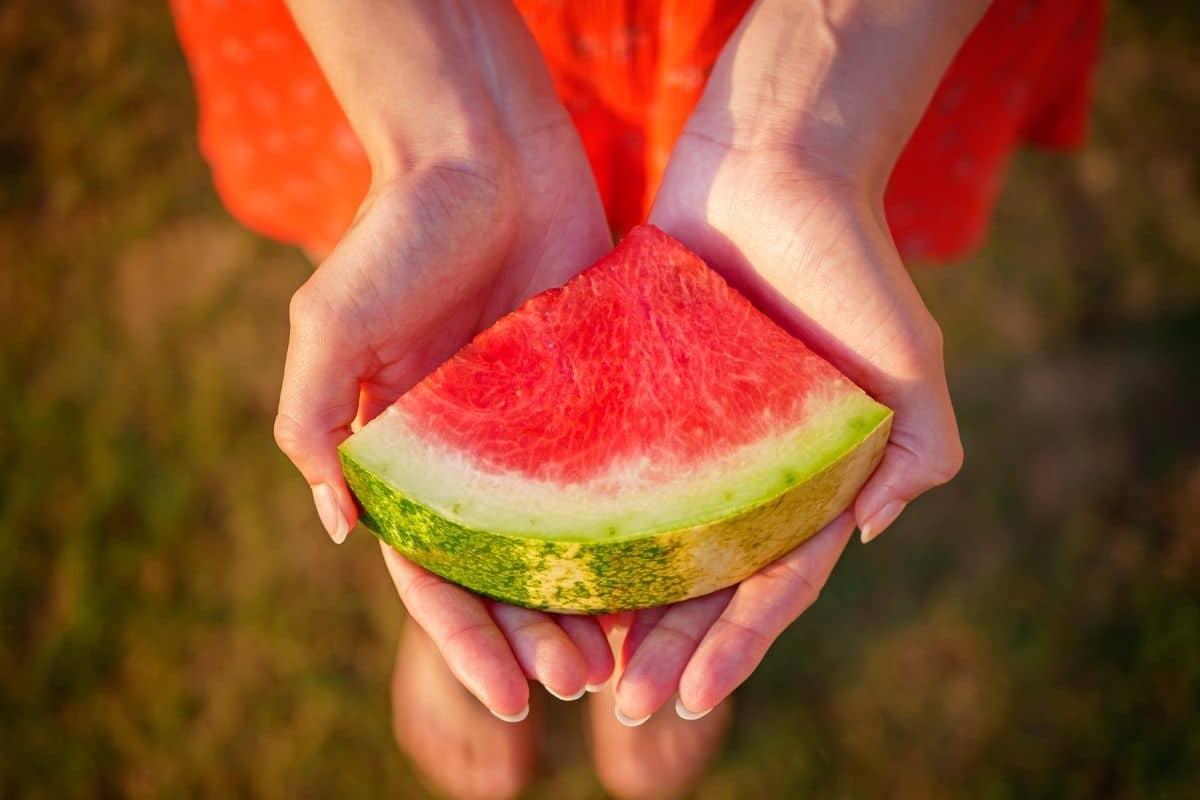 Knock-knock. Who’s there? Probably not your watermelon.

There’s a common old wives’ tale that knocking on watermelons will tell you whether a watermelon is ripe. Although you can hold the watermelon and give it a solid knock to feel vibrations (if it’s ripe), this doesn’t always work.

Ripe watermelons, theoretically, have deep, hollow sounds, meaning they’re filled with juice, while under- or over-ripe watermelons will sound dull.

The theory behind this method is solid, but unfortunately, not always entirely accurate. However, you’ll be better off trying the tips above, as these are more accurate ways of determining the ripeness of a piece of fruit.

11. Detect the Signs of a Ruined Melon 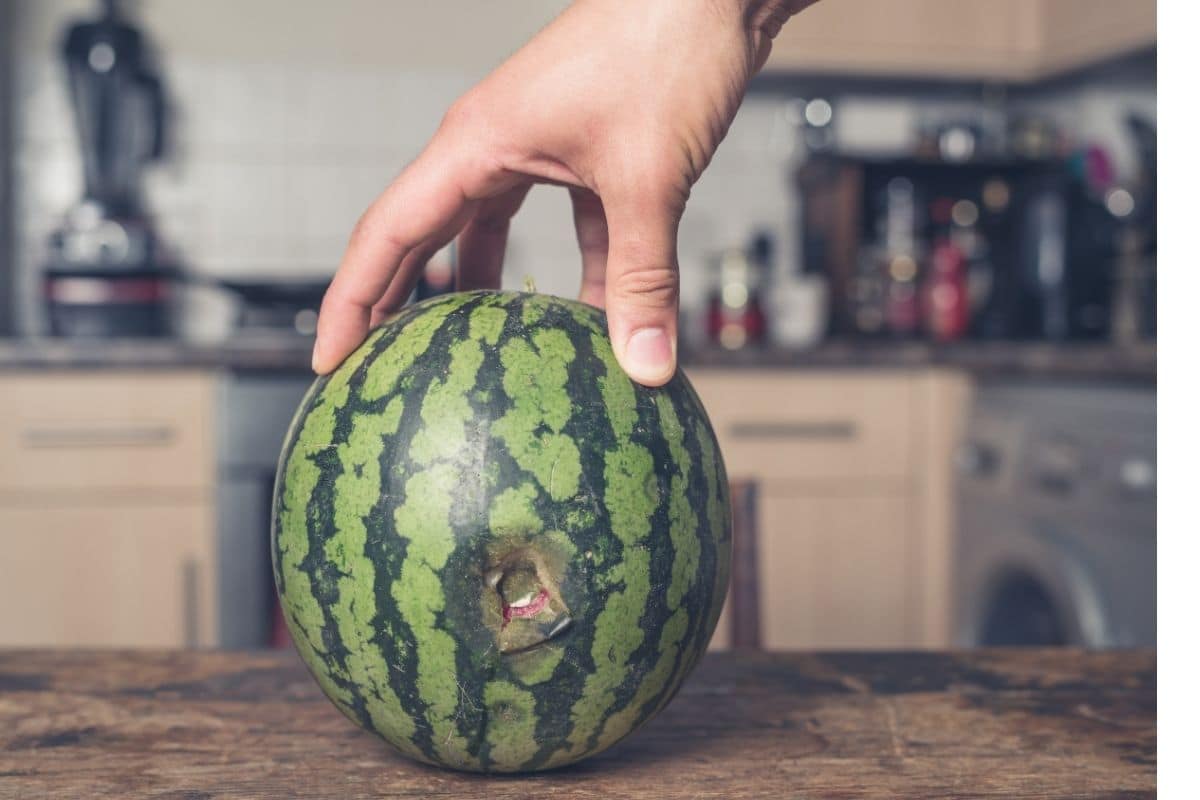 Usually, grocery stores and farmer’s markets will pull spoiled watermelons before they get to this point - you shouldn’t have to do any legwork yourself.

However, if you’ve brought your watermelon home and are worried about whether it’s still safe enough to eat, you may want to check for a few telltale signs.

For example, does the watermelon have any dark-colored spots? Is the flesh soaked with water? Both of these indicate that the watermelon might have some sort of fungal infestation.

Similarly, there are clusters of target-like blemishes that may appear on a watermelon. These usually indicate that a virus has affected the melon.

Another common ailment suffered by watermelons is damage from rind worms. These look like irregular brown or white patterns on the rinds and can be caused by insect feeding.

Of course, if your watermelon smells sour or tangy in any way, this is a solid sign that your watermelon has begun to ferment. You may want to toss it rather than take a chance and eat it - although it likely won’t taste that good, anyway. 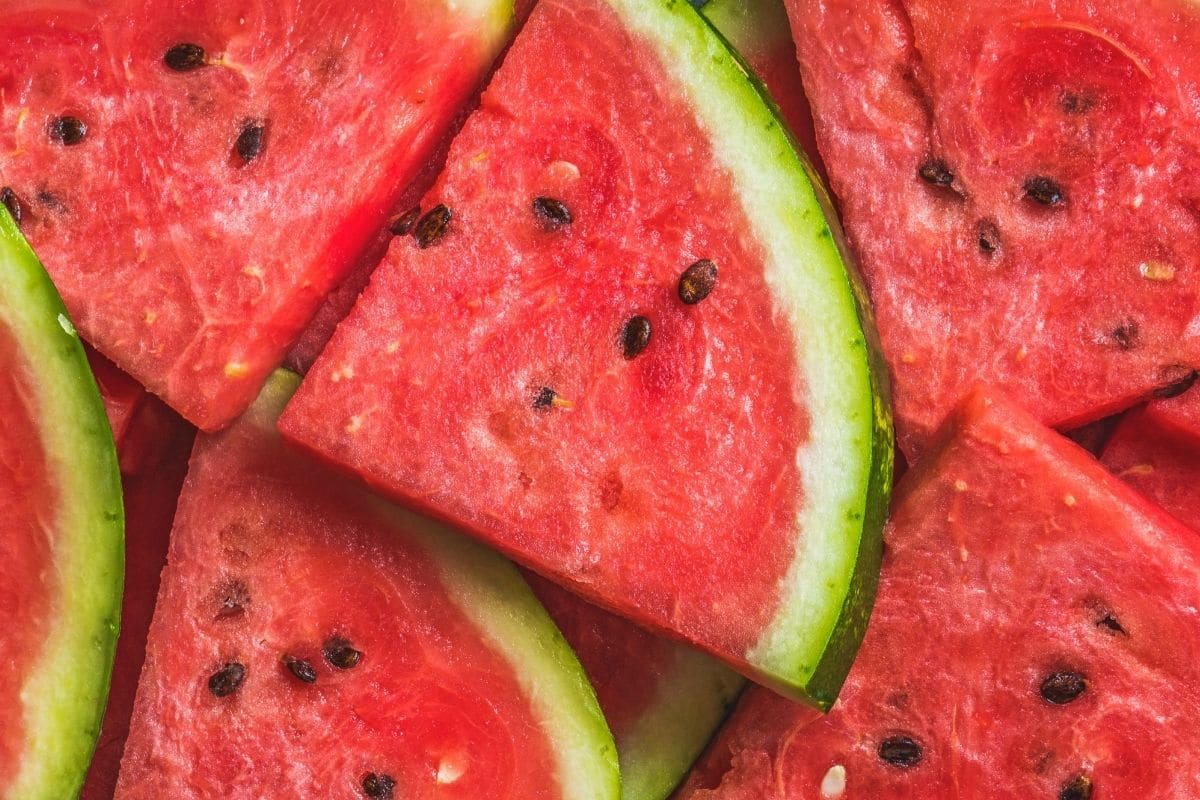 The best tip for choosing a ripe watermelon? Buy when they’re in season. Although you might love eating watermelon year-round, this fruit is at its peak between May and September. Choose fruit at this time of the year, and you’ll be almost guaranteed to have a tasty pick, each and every time.

Consider Growing Your Own Watermelon Instead 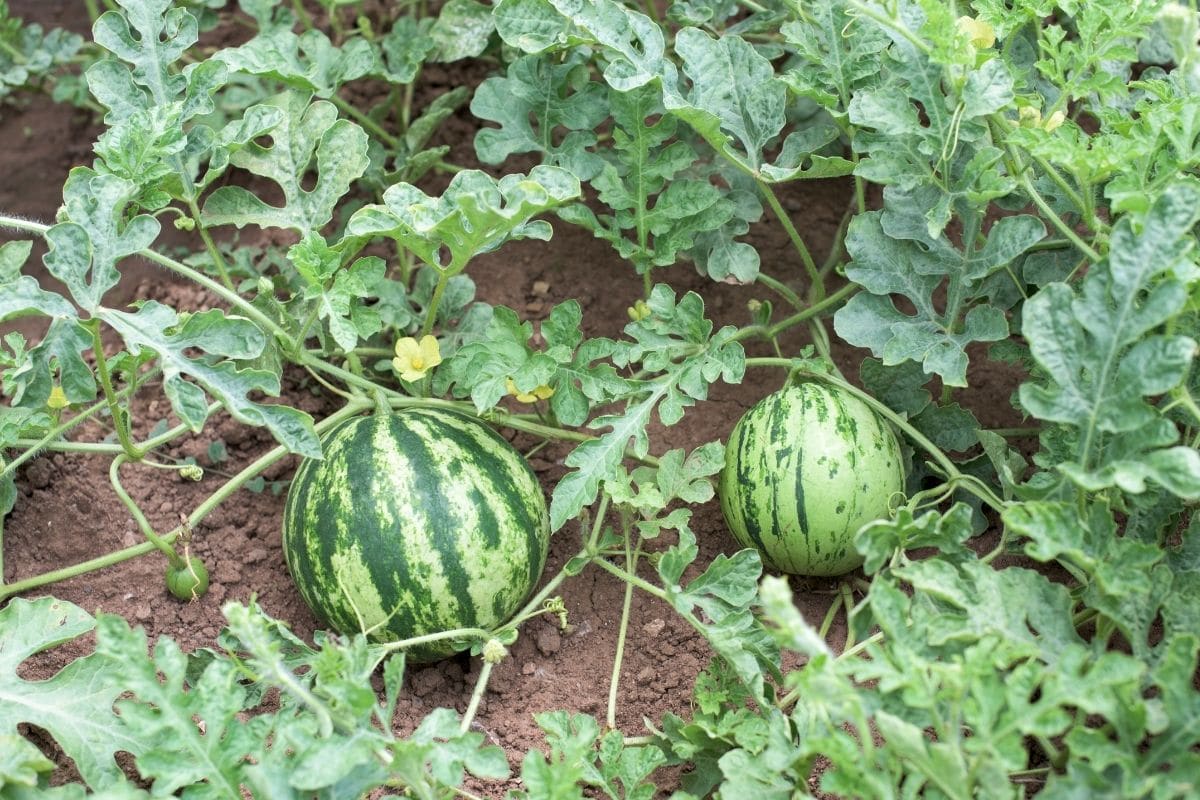 Of course, the best way to tell if a watermelon is ripe is to take a peek at its juicy red flesh. But that’s not necessarily possible, of course, when you’re buying it at the grocery store or farmer’s market!

Another easy way to tell if your watermelons were harvested at the proper time? Harvest them yourself!

If summer is already underway, it might be too late for you to start growing your own crop of juicy watermelons for this year.

However, it might be smart to plan ahead and grow your own watermelon for next year. Growing watermelon is easy as long as you have a sunny spot of the garden that can remain well-watered. Why not pick up a few seeds and give them a try for yourself?