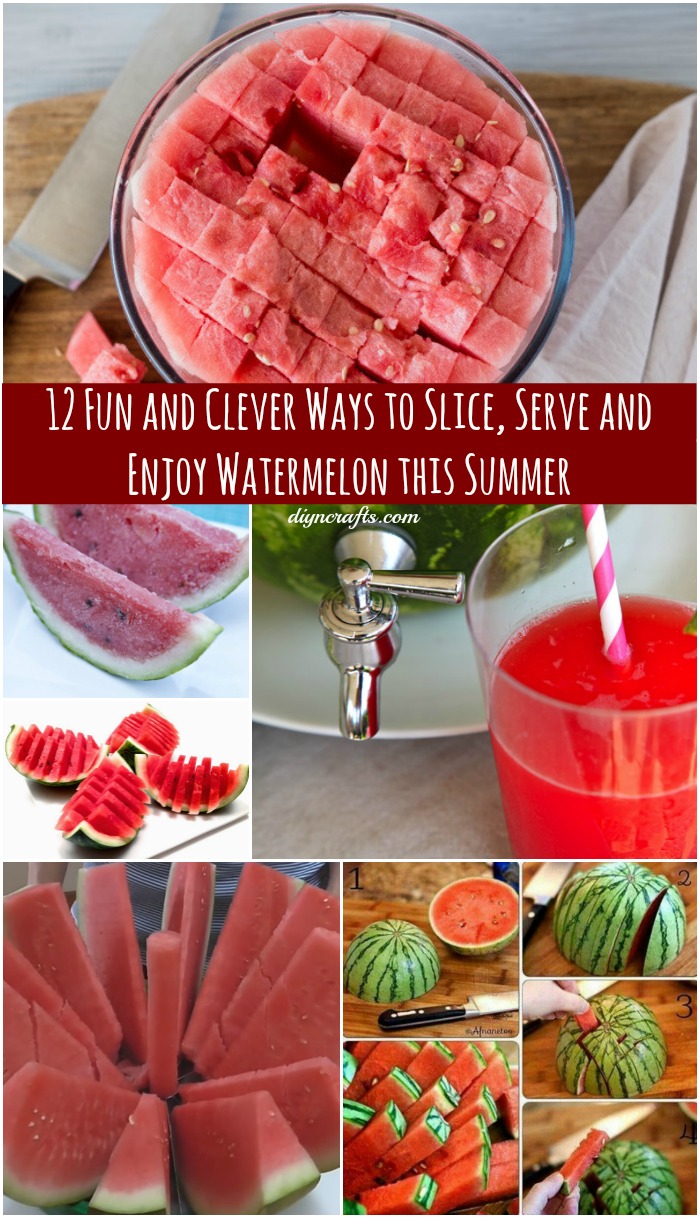 Watermelon tastes the way summer feels – sweet and refreshing and fun. If you’re planning on eating a lot of watermelon during the warm months, then you might as well do so in a creative and interesting way. Boring old watermelon wedges are out, and easy-to-eat strips and carvings are in! If you want to take your love for this delicious pink fruit even further, do so with these adorable DIY watermelon shorts.

This simple cutting method yields strips of watermelon that makes eating it just so much easier so that you don’t get sticky juice all over your face. All you have to do is cut the watermelon in half and place the section flat side down, and then cut multiple horizontal and vertical strips so that it looks like you have little squares on the shell. You don’t even have to do anything special to present it – just keep it as is so that people can simply grab a piece and enjoy.

Strips in a Bowl

This method is similar to the one above, although in this case, you won’t have any of the rind. You start by cutting the watermelon in half and placing the section upside-down on your cutting board. Then, use your sharp knife to cut off the rind. When all you have left is the lovely pink fleshy part, cut strips that go both horizontally and vertically. Now for the cool part – place a bowl over the watermelon and flip the whole thing over with the board so that your strips are now perfectly placed into the bowl. If you don’t want sticky fingers, keeps some forks on hand so that you can spike the piece you want.

This is such a pretty way to serve watermelon slices – it almost looks like some kind of modern art piece or sculpture. Here’s how to achieve this:

The absolute easiest way to cut a watermelon may just be to use a specially designed slicing tool. You may have seen smaller versions of this, but this giant slicer, available on Amazon, is perfect for these big green fruit (…and veggies, because, technically, a watermelon is both a fruit and a vegetable).  Simply cut off both ends of the watermelon, sit it upright, and then bring the slicer down on it so that you get perfect wedges. This does, however, require some arm strength.

Start your hedgehog by slicing off a thin piece at the bottom so that you can rest the watermelon on a flat surface and avoid any slips of the knife, then:

Start your shark by cutting of the bottom part at an angle for the base, then:

This shark tutorial is very similar to the one above, so I won’t repeat the steps. The difference is that instead of filling it with just the watermelon pieces, other fruits are added to make a scary but yummy fruit salad. 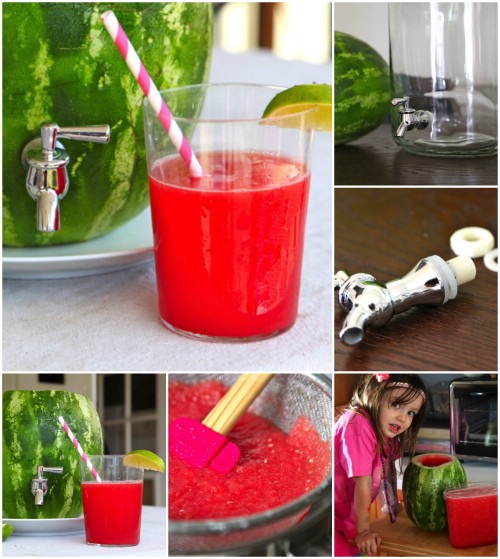 Is there anything quirkier than serving refreshing watermelon juice out of a watermelon keg? This is such an awesome idea that I’ll definitely be implementing over the summer! And when the kids aren’t around, a touch of booze in the juice could be just what you need. If you’re feeling particularly lazy, you can try this simplified version of the same concept.

Honestly, this is just too cute! This adorable little fruit skewer grill is perfect for any summer barbecue. If you don’t have a melon baller, you can simply scoop out the watermelon flesh with a big spoon and just cut into cubes – this will probably be a lot quicker, too. 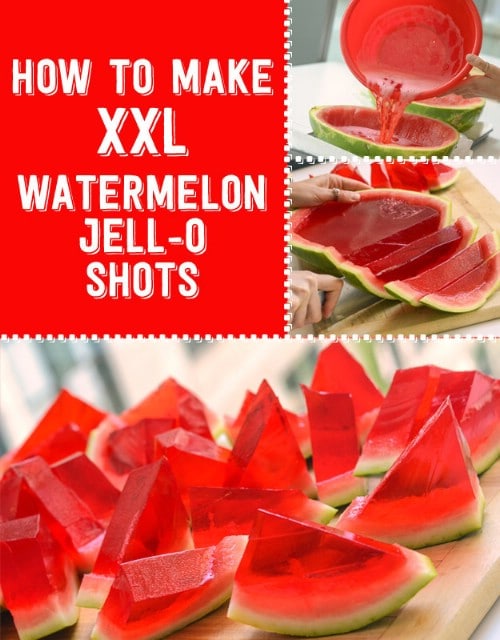 If you’re looking for a fun way to serve some spiked Jell-O then this is exactly the way to do it. With just four ingredients, this is the perfect way to spice up a party, and the fact that you’re actually serving it as watermelon slices just makes it that much more exciting. Save the actual flesh part to eat as a snack or make a quick fruit salad. 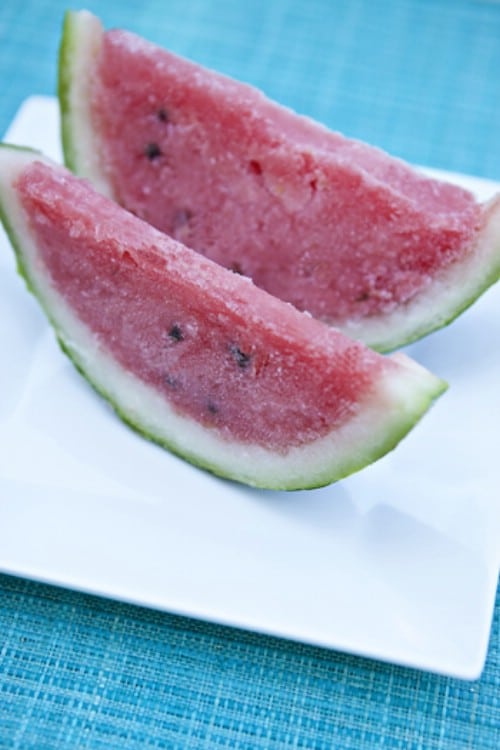 Sorbet is really is easy to make, and the added lime in this recipe just gives you that nice little bit of tang to balance the sweetness. You could, of course, just serve it in bowls or cups, but where’s the fun in that? If you don’t tell anyone that it’s actually sorbet, your family or guests will get a pleasant surprise when they take their first bite. 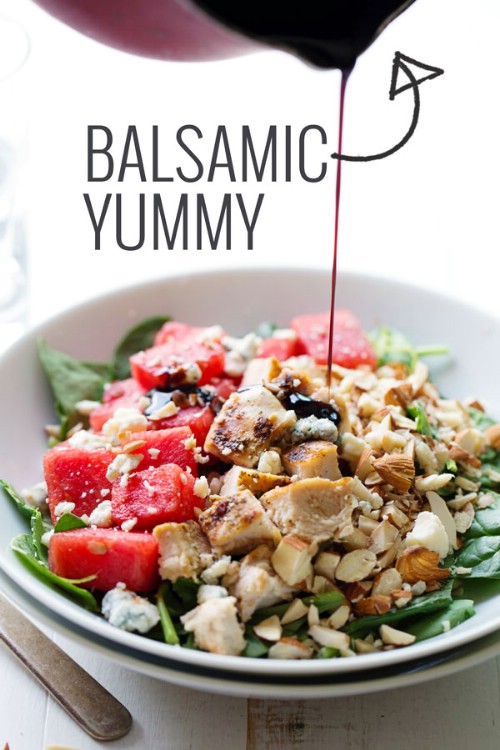 I practically have one foot out the door already because, honestly, this is one of the best looking and sounding salads I have ever come across! Watermelon, chicken, baby spinach, almonds, and blue cheese (yes!), drizzled with balsamic glaze… it really can’t get any better than that!