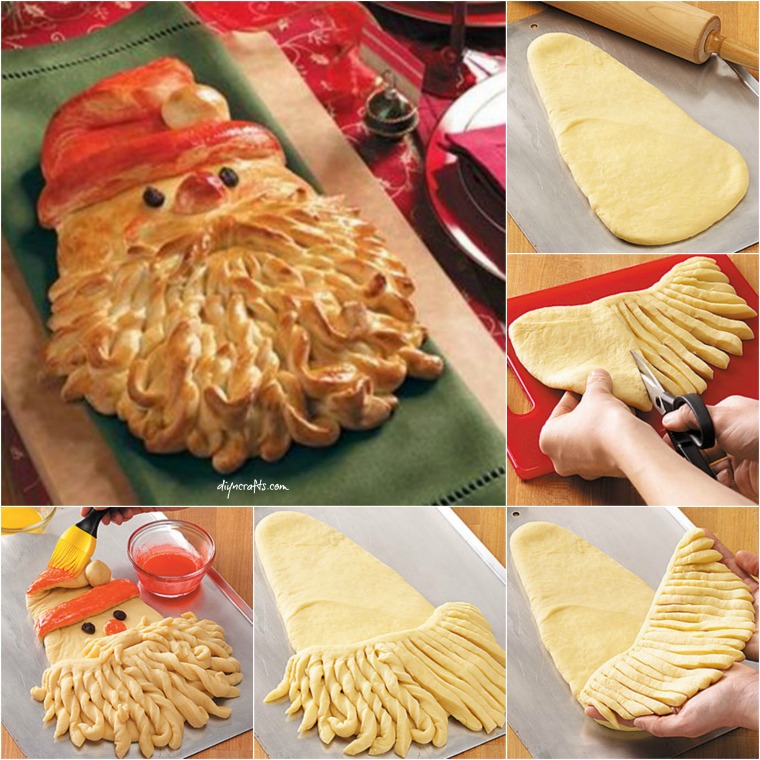 So let’s be honest here, we all love to impress people with our incredible baking or cooking skills, but maybe we aren’t always in the mood to make that much effort and spend that much time on something that’s going to be gobbled up in a fraction of the time it took to make (and clean up afterwards). That’s why we’re delighted to give you this Santa bread recipe: it’s delicious, whimsical and fun, and best of all, it looks like you slaved away for hours on end even though the actual effort doesn’t reflect that perception.

When doing the egg wash, do the regular one first and the red one second; this will prevent the color running onto the rest of Santa’s face. Also make sure to use enough drops so that the hat comes out red, not pink.

When covering the assembled Santa with foil before baking (step 8), just make sure not to let the foil actually touch the dough – it will get stuck and rip off once you remove the foil.

If you’re in a real rush, you can use frozen dough instead of making your own.

This bread will taste even better when accompanied by cinnamon honey butter. Whisk together one cup of butter (two sticks) at room temperature, one cup powdered sugar, one cup honey, and two teaspoons ground cinnamon.  Absolutely delicious!

Similar Project:  The Only Cake Decorating Trick You'll Ever Need

Recipe and Step by Step Instructions – Taste Of Home