It has been said that the smell of bacon, more than any other scent, has the power to tempt vegetarians back into a carnivorous lifestyle for just one salty, smoky bite of goodness. Bacon brings the family together in the mornings; it seduces men, it comforts women, and it makes nearly any dish even tastier.

Bacon’s best quality is that it can be fried or cooked in the oven in a matter of minutes and then devoured just as is. However, for the more adventurous, we’ve assembled some of the best bacon recipes so that you can enjoy your thin, cured pork strips in just about any meal imaginable. Not that you needed an excuse… 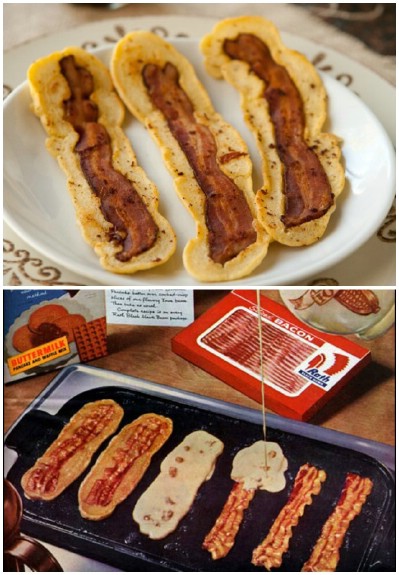 Here’s another easy yet mouth-watering breakfast to make on a lazy Sunday morning; it may not be the healthiest, but you deserve it after a hard week of work. All you really have to do it whip up a simple pancake batter and pour it over a strip of streaky bacon until it’s that lovely golden-brown color. 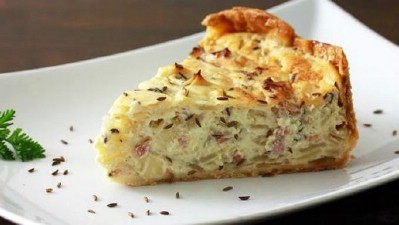 Zwiebelkuchen is a traditional German savory deep-dish pie – much like a quiche. This particular recipe calls for a caramelized onion, sour cream, and bacon filling, along with the base ingredient of eggs, of course. The prep time doesn’t take too long, especially since you can simply used refrigerated pie crusts instead of making that from scratch; the real star of the show is the filing. The pie takes about 50 to 55 minutes to bake in the oven, so make sure you time it perfectly so that you can serve this dish while it’s nice and warm. Comfort food at its best! 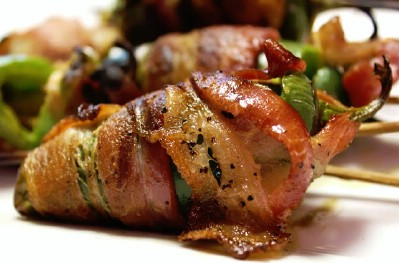 If you can’t stand the heat you may as well get out the kitchen right now. These bite-sized spicy nibbles are delicious when cooked on the barbecue and washed down with a nice cold beer on a summer’s day. Stuff your peppers with cheese – you can use a nice sharp cheddar or even some smooth cream cheese, as long as you wrap your little parcels with bacon, you’re good to go. 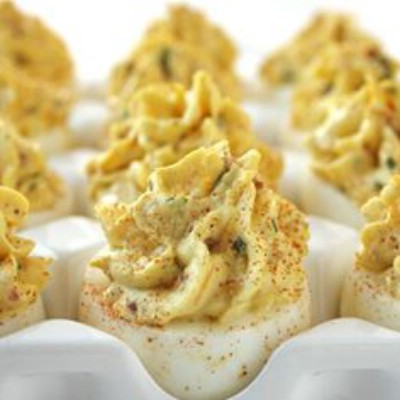 Everyone loves a classic, but reviving it with bacon gives you a whole new burst of flavor. This deviled egg recipe includes bacon, of course, green onion and cheese. You don’t have to stick with cheddar, though; feel free to experiment with different types of cheeses like gruyere. You can also refrigerate these little devils for up to 12 hours if you want to plan the meal in advance. 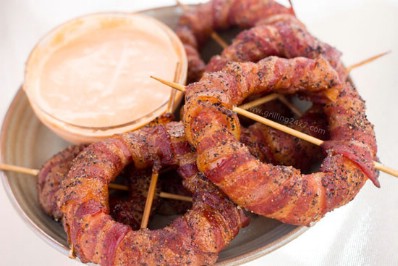 Another great barbecue snack is these onion rings that are wrapped in smoky bacon instead of the usual onion ring batter. This recipe calls for brushing the onions with Sriracha hot sauce before wrapping the bacon, but if your taste buds don’t respond well to spicy foods, you can either give it a skip altogether or replace it with a nice smoky BBQ sauce instead. 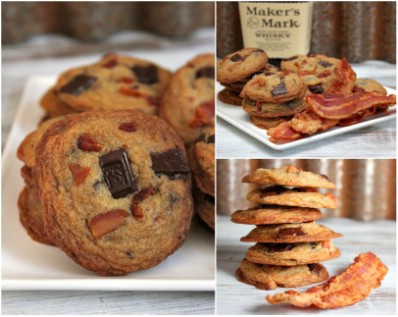 Everyone loves the old classic chocolate chip cookies, but whoever thought of adding bourbon and bacon to the mix is a pure genius in our books. This recipe uses some of the actual bacon fat in the cookie, so not only do you get delicious, salty bites of bacon, you really get to taste that goodness throughout the entire cookie. The bourbon is just there to enhance the flavor, and since the alcohol cooks out during the baking process, this recipe isn’t just for the adults, but child-friendly too.

Similar Project:  5 Mouth-Watering Summer Popsicles You Can Easily Do At Home 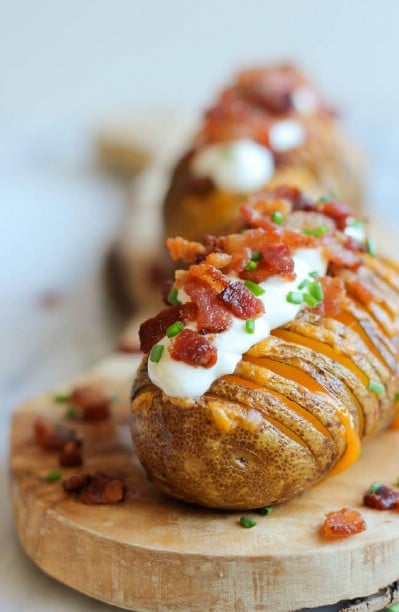 A hasselback potato is a lot less complicated that it looks – and it does look beautiful! Instead of quartering your baked potato to fill it, you slice several little slits so that the potato really absorbs the butter. After baking, the crispy load is topped off the cheddar cheese that melts happily into each little crevice, sour cream, crispy bacon bits, and some fresh chives. That’s how you make an easy yet fancy-looking loaded potato. 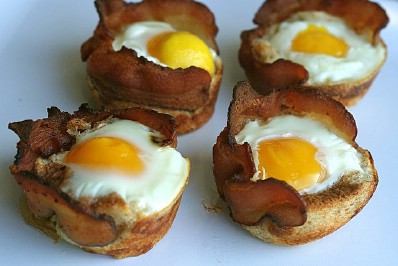 The best breakfast, undoubtedly, is good old fashioned bacon, egg, and toast, but combining this winning trio in a muffin-sized bundle of happiness takes it to a whole new level.  The crispy bacon literally hugs the egg-topped toast, and it’s your choice whether you want runny or firm yolks. The recipe is relatively healthy and pretty quick and easy to make, just make sure you have a muffin tins to create the rounded shape, and don’t underestimate how quickly these little delights will be eaten! 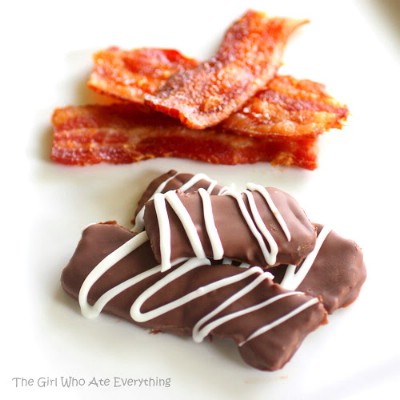 Yes, you read that right – bacon covered in chocolate. If you’re looking for a super easy snack to make for your husband, boyfriend or kids that will really make them appreciate you even more, then you’ve got the winner right here.  It really is as simple as it sounds, and this recipe also lends itself to some individual experimentation on your part depending on your (their) taste: you can use either milk chocolate or dark chocolate, and you can have fun with some toppings and making it look pretty if that’s your kind of thing. You can even lure the kids in to the kitchen and get them to create their own heavenly salty treats. 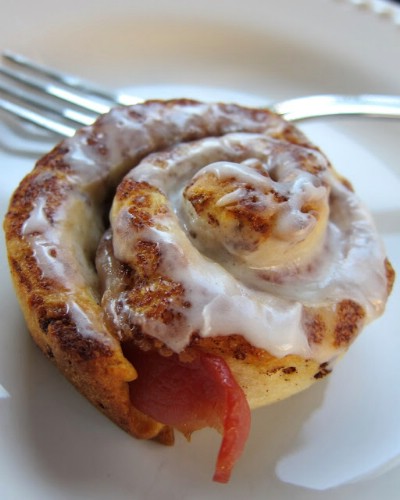 In the ancient world, cinnamon was once so highly regarded that it was considered a gift fit for kings, monarchs, and even gods; its source was kept a secret for hundreds of years just so that the spice traders could cement their monopoly. Thankfully, today, the versatile spice is readily available for us so we can make bacon-stuffed cinnamon rolls. You don’t even have to fuss with making your own rolls; you can simply unroll pre-made refrigerated rolls, add the bacon and re-roll – it’ll only take about 15 minutes in the oven before you can sink your teeth in. 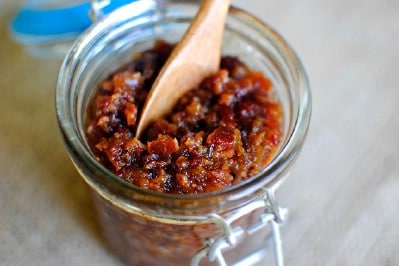 Bacon jam. Just let that thought sink in for a while: glorious, spreadable bacon, available to you at every minute of every day. This recipe requires quite a few ingredients and some love and care, but the result is a full-bodied, textured jam that you’ll be eating by the spoonfuls. Make a large batch and store helpings in lovely rustic jars for a unique and sure-to-be-appreciated gift idea for practically any occasion from a housewarming to a bridal shower. 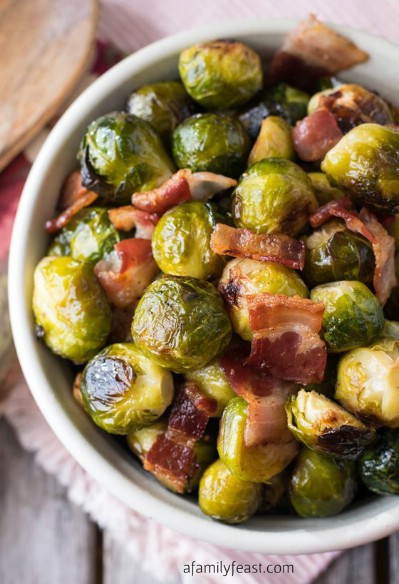 For some or other reason—we’re really not quite sure why—Brussels sprouts have gotten a really bad rep. These miniature leafy green vegetables are really quite appetizing if prepared correctly (crispy instead of mushy), and they’re very healthy as well. If you’re trying to turn your kids on to these veggies, roasting them with bacon is an easy way to get them closer to trying them. Make sure you spread the bacon evenly so that the flavor really permeates throughout all the little sprouts. 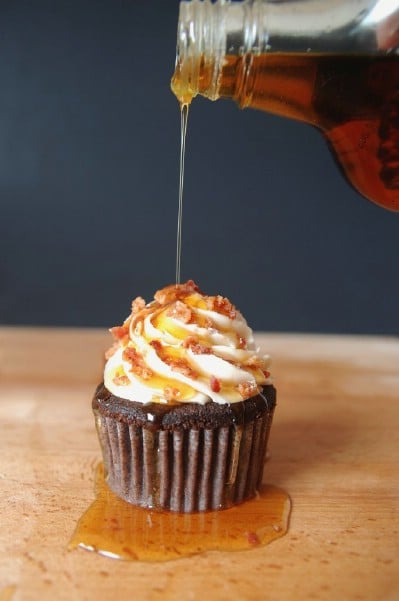 These delightful little chocolate cupcakes are topped off with maple syrup frosting and crunchy pieces of chopped bacon. For the very best results, indulge in pure maple syrup and some good quality streaky bacon – sprinkle as much as your hungry heart desires. The combination of maple syrup and bacon is just so damn good that it simply must appear on our list more than once.

Similar Project:  25 Frugal Homemade Baby Food Recipes That Your Little One Will Love 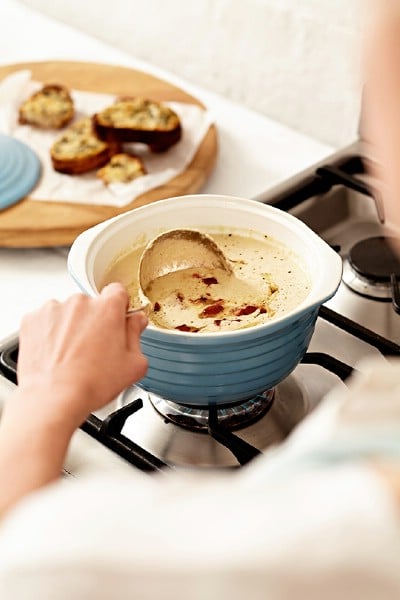 When you’re looking for a bold and cozy soup to warm you up from the inside out, this is the one to make. The recipe is simple to prepare and the ingredients are also budget-friendly. As an added bonus, this is a clever way to get your kids to eat more vegetables – they won’t even know that they’re eating cauliflower; they’ll just be thankful for the bacon! Add some toast and you have a perfectly hearty winter meal. 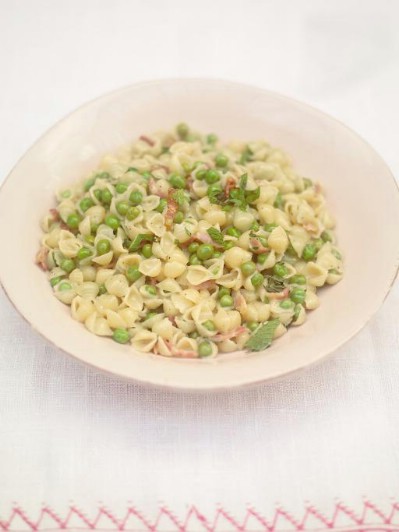 This easy pasta dish is great if you need to whip up a quick dinner but don’t have much time to spare – 15 minutes is really all you’ll need here, and you’re bound to have most of these ingredients in your kitchen already. The sauce is creamy and smoky, but the addition of peas and fresh mint takes some of that heaviness away so that it still feels relatively light. 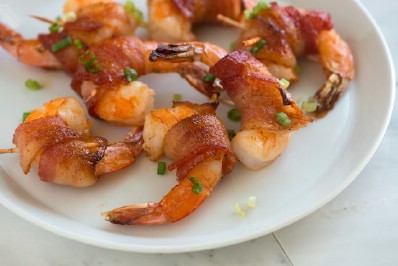 Sweet, salty and spicy are three favor profiles that go together famously; add some shrimp into the mix and you’ve got one fantastic snack. The bacon is glazed with a combination of maple syrup and spicy Sriracha sauce, and then wrapped around a succulent piece of shrimp. It only takes about 30 minutes including prep time, and serves as a great hors d’oeuvre for a cocktail party, dinner party, or even your monthly book club meeting. If anyone in your party or family doesn’t like shrimp, the spicy maple bacon wrapped up on its own is equally as tasty. 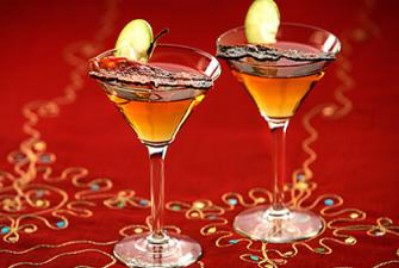 Bacon no longer has to be limited to breakfasts; in fact, it doesn’t even have to be limited to an actual meal! Bacon has infiltrated our cocktails and we’ve never been happier. This martini recipe is one especially for the ladies. It’s the perfect complementary drink to match the shrimp recipe from above for any type of girls’ get-together. 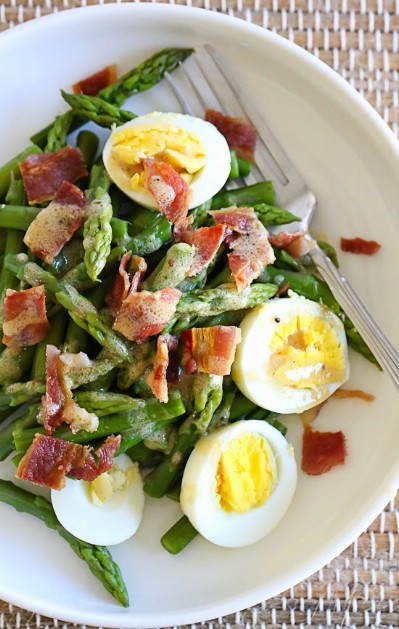 Asparagus, egg and bacon is a match made in heaven, but what really makes this dish pop is the generous drizzle of Dijon mustard vinaigrette. It’s quick, it’s delicious, it’s summery and it’s healthy. 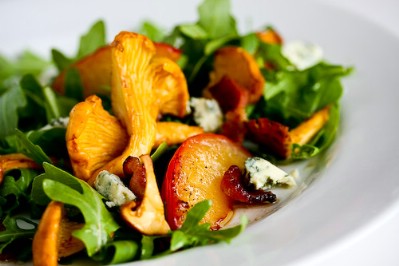 Bacon pairs perfectly with juicy plums; actually, any stone fruit will do so feel free to make different versions of this salad. The sharp, creamy blue cheese adds another great texture, and again, is one of bacon’s best friends. If you want an even heartier salad, you can add some grilled chicken to the mix. 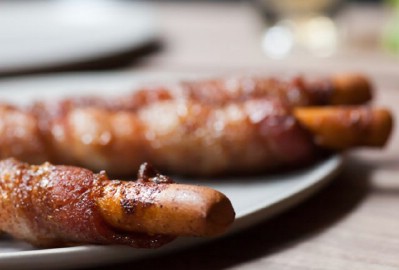 Whether you want a Bloody Mary as hair-of-the-dog cure or as a boozy summer cool-down treat, this popsicle recipe is quite possibly the best adult version of a kid’s favorite we’ve seen so far. Swapping the wooden sticks for bacon-wrapped breadsticks is a novel way of adding yet another twist, and saving on wasteful purchases. 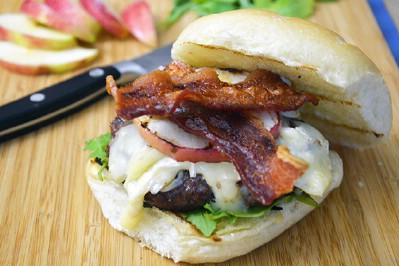 Pork and apple are two peas in a pod; bacon and brie are two peas in a pod. It makes sense, then, to combine these three friends in one exquisitely mouth-watering burger, right? This dish is fairly easy to make and will only take up about 15 minutes of your time, which is longer than it will take you to devour the end result. 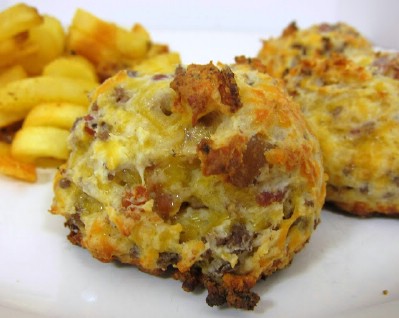 If you’re in the mood for a burger but don’t feel like making the above recipe, why not try this version of a burger in a happy little ball? These crispy little puffs are packed with everything you want in a burger; when the cheese oozes out after your first bite you’ll quickly be converted from the traditional burger. You can even freeze pre-made puffs to pop in the oven another day. 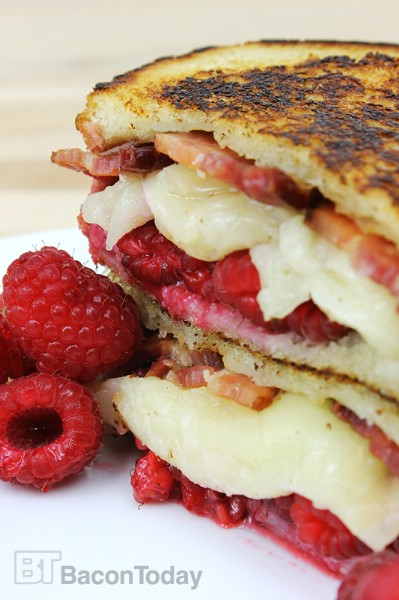 Baked Oyster with Bacon and Leeks 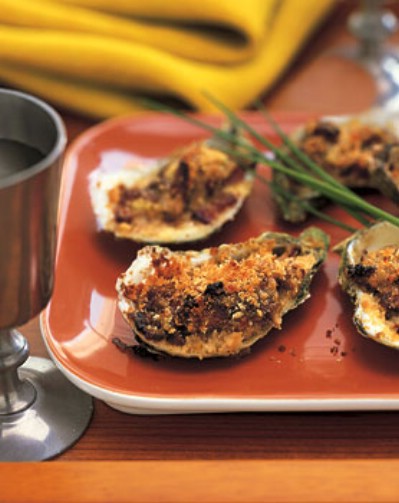 Let’s face it, raw oysters aren’t for everyone. To some people, there is nothing worse than the thought of a salty, slimy oyster sliding down their throats. So if you’re desperate to make some oysters that everyone can enjoy, just throw some bacon into the mix, crumble some breadcrumbs on top, and bake them until golden brown. You’ll quickly be able to convert the oyster-haters with this one. 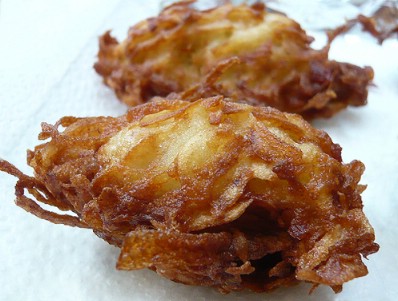 These hash browns are actually more like fritters – they look like yummy, crispy little hovercrafts. Of course, you could omit the bacon if you’ve got vegetarians nearby, but they won’t be anywhere as delectable. Serve these for breakfast with eggs, as a dinner side dish, or on their own as appetizers. 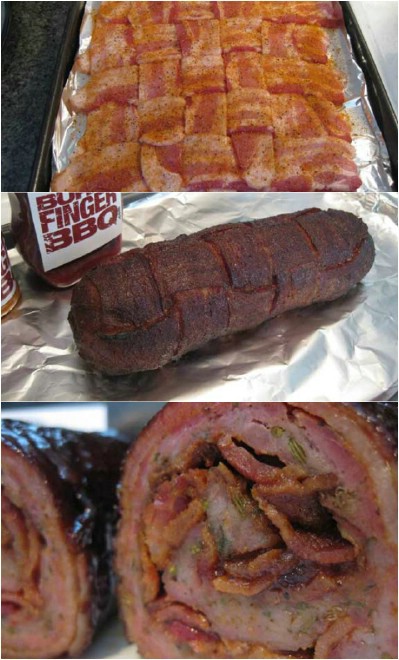 We have to end off our bacon recipe list with a bang, and a bang you shall you get. This final recipe is the most incredibly pork-tastic thing you will ever see and ever have the pleasure of serving (and eating, of course). It involves a bacon weave topped with Italian sausage meat (hello again, pork), topped with bacon bits and rolled into the biggest, tastiest, porkiest sausage you have ever laid eyes on. You’re welcome.