I’m not always in the mood to create some fantastical hairstyle with curls and braids and extensions and what have you. So when I’m not up for a massively time-consuming ‘do I simply sweep up all my hair into a ponytail, but lately, that’s been feeling just a little too boring for me. So I decided to browse online for some sassed-up ponytail styles and I have to tell you, I hit the mother-load! There are some truly incredible tutorials out there, so I’ve cherry picked by favorites for you to try, too.

So without further ado, here are some ways to fancify the humble ponytail without too much effort.

This inverted ponytail is actually an old classic – I remember it from my childhood. But since then, I’ve honestly totally forgotten about it, so it’s definitely time for a little comeback. Just make a low ponytail, make a small hole above it, and flip the ponytail through it. It also looks very chic on the side, or with an added accessory.

I love this multi-elastic ‘do because it’s really easy, it gives you a nice voluminous look and feel, and because it reminds me of Princess Jasmine’s hair from Aladdin. And yes, that last one is definitely a valid reason.

This one’s great if you like a bit of texture or are a fan of the boho look. The end result may look rather complicated, but if you just take a moment to read the instructions you’ll see that getting this awesome rope-like appearance isn’t all that tough; you’re basically just trying little knots around your hair.

The Braided Side Ponytail 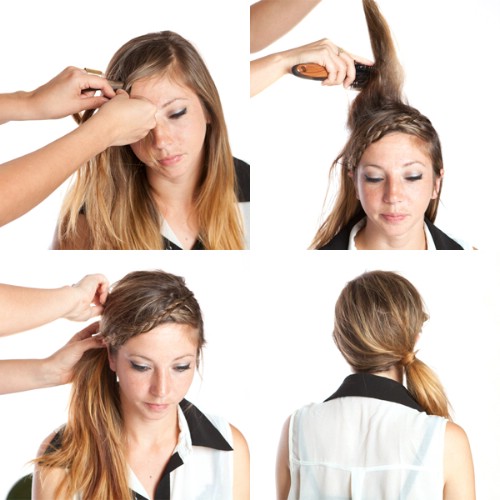 This is a great fun, young and fresh style that I really love to do myself. You just French braid the front of your hair along your hairline and then secure it into a low, side ponytail. You can tease the ends a bit for some added oomph. 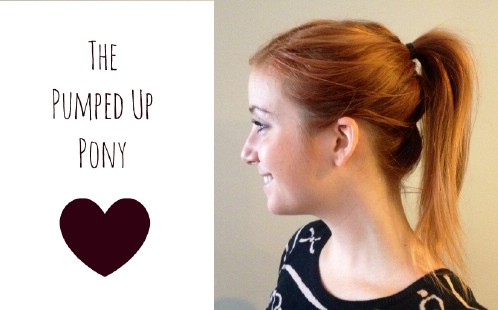 Give your saggy ponytail a friendly lift with just one helpful little butterfly clip. Take a top section from the ponytail, clip the bottom half, tease the top section and simply lay it over the clip for an instantly pumped-up classic look. 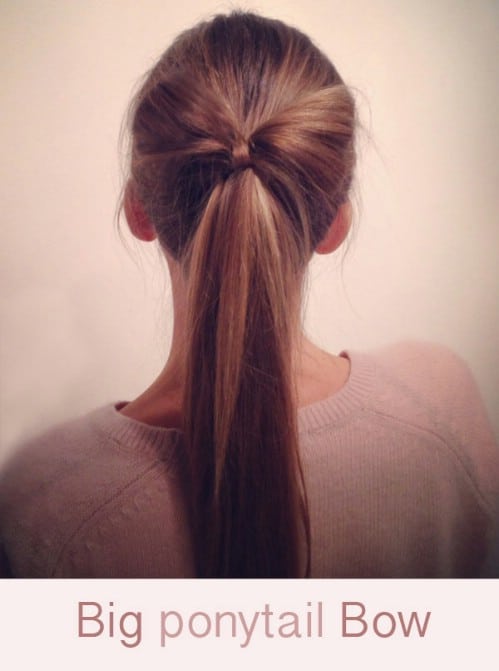 Lady Gaga made the hair bow famous when she burst onto the scene, and I have to say, I still love it. For me, this is the easiest hair bow tutorial, and I like the fact that you’re not using all your hair – it’s just like a pretty little embellishment on a regular ponytail. 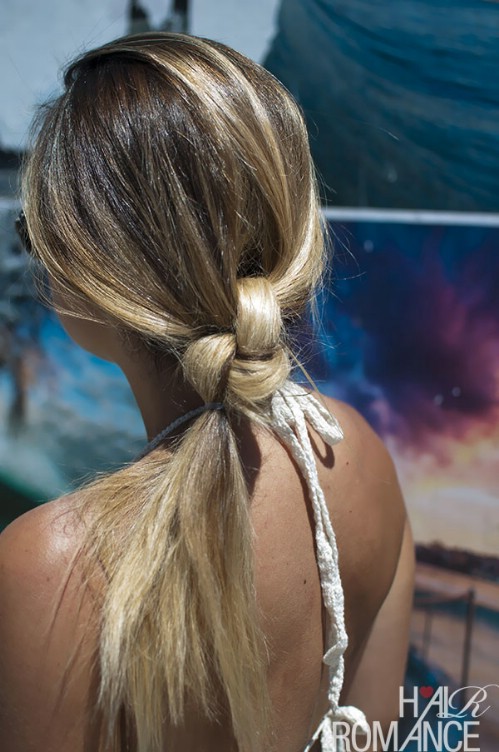 When you want something a little bit edgy but not too way out there and don’t have much time at all, always go for the double knot. You literally just tie your hair into a knot and then another knot below that, and secure. It could not be any simpler! 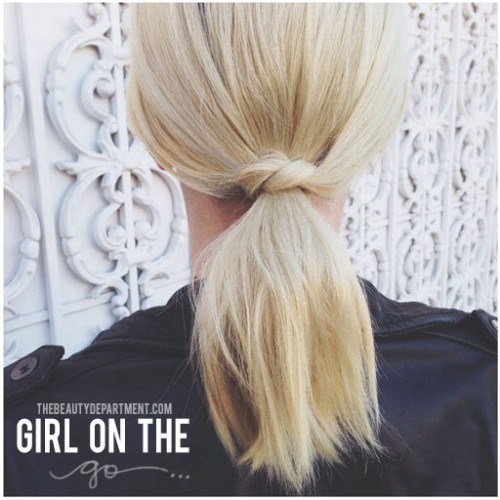 I really love the simplistic elegance of this one, and I know you will too. When tying your hair in a ponytail, leave out two front sections which you tie over the elastic band, securing the loose ends underneath. It’s like a fresh alternative to the classic strand-wrapped-over-the-elastic.

Sometimes it’s nice to go sleek and elegant, and sometimes a situation calls for an intentional messy look. You just need to do a bit of teasing, bobby pinning and roughing up to achieve this laid-back hairdo.

The Volumized Ponytail for Short Hair 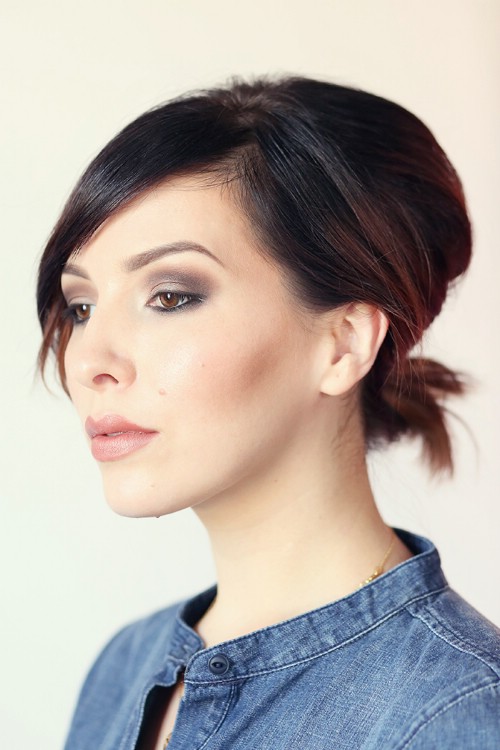 You can still get a puffy ponytail if you have short hair, and here’s the best way how. It’ll take some teasing and spraying, but the result is a gorgeous ‘60s-style ponytail that packs a punch and looks a lot happier than if you were to simply try slick it all back into one elastic.

This style is perfect for going to the gym since it will keep strays out of your face as you work that body, but it’s certainly not limited to working out. You’re basically just creating a bunch of half-ponies underneath each other, starting from the very top of your head.

I’m not going to lie, this is definitely one of the hardest ponytails to do—especially on yourself—so you’ll probably want a friend to help out. It does look gorgeous, though! Wrapping your ponytail in a thin, elegant French braid is such a clever way to boost a classic look.

I really love the elegance of this style because it’s actually rather simple, but it looks so beautiful. You basically make a low ponytail with the bottom section of your hair, then divide the rest of your hair into three sections and curl them in towards the ponytail. Is anyone else as in love with her hair as I am?!

The Twisted Side Ponytail

Here’s a great way to beautify the classic side ponytail. Starting from one side, pin your hair in small sections all along the base of your neck, then sweep it all together to make a low side ponytail. Then simply wrap a front section over the elastic for a polished look. The wavy, curled-in look actually reminds me of a mermaid.

I am totally in love with this style and can’t wait to try it on myself! You just need to Dutch braid from your middle parting to the base of your head, and repeat on the other side. Then just end it off by tying your hair in a low ponytail. You can even do this with thinner hair since you (gently) pull the braids apart for some extra volume.

This is a really cool edgy and punky look that is so very easy to do. You just start a French braid with the very middle section of your hair (this gives the Mohawky vibe) and then just finish it off by tying the rest into a ponytail at the back of your head.

The Twisted Ponytail for Curly Hair

Tying your hair up with super curly hair can either be a complete nightmare or it can be an absolute blessing. It just depends on the day, really. Here’s a nice way to tame the curls while still showing them off in a simple and elegant twirled-in ponytail.

Fish and ponies! The fishtail has made a stellar comeback – I remember doing it in lower school, but I completely forgot about it until recently. What’s great is that you can do this in a rush when your hair is still a little wet from the shower. Just make sure you fluff it up to really show off the fishtail. 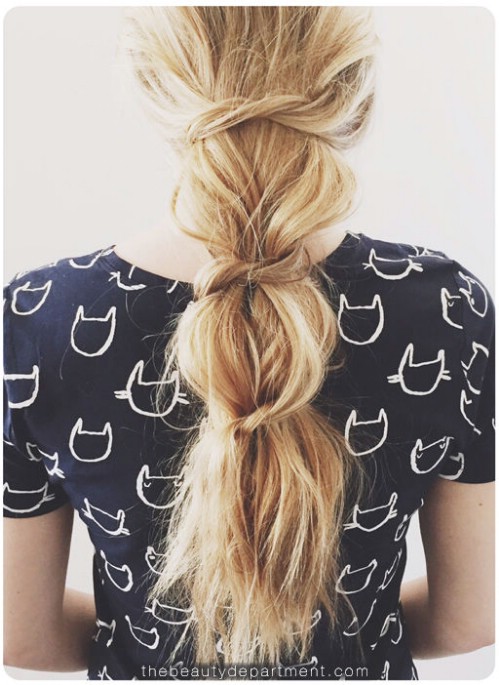 This one is similar to the multi-elastic ponytail, although this time you use your own hair instead of elastic bands. Basically, you just tie little half-knots around the flowing ponytail with two thin strands. It’s the ultimate boho-hippie-beachy look.