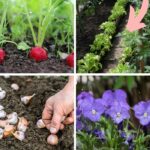 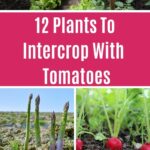 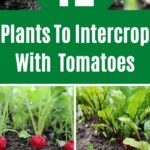 Growing tomatoes is an easy way to get started with gardening if you don’t have a lot of experience.

However, you might be wondering how you can maximize your yield when it comes to growing this delicious vegetable (or is it a fruit? The jury is still out!). If you’re growing tomatoes vertically, which is what happens when you stake up the fruits, you are going to waste some space.

Luckily, there are several types of plants you can grow underneath your tomatoes to make the most of the space. This is a process known as intercropping.

Intercropping is an easy way to increase your tomato yield. Here are some of the best ways to do it - and protect your soil - for long term success.

You may enjoy looking at a nice, orderly garden in which each crop has a specific section of the garden dedicated solely to it and it alone.

However, there are several problems in doing this. Not only can it result in some wasted space, as not all plants have the same growth habits (some grow upwards while others grow outwards), but it can increase your likelihood of pests and diseases.

For example, certain pests only target a single type of plant. The tomato hornworm is one example. This pest only goes after tomatoes, so planting a ton of tomato plants together can be problematic.

Another issue is that growing only one type of plant in an area leaves much of your soil open to problems.

Not only can bare soil be eroded and washed away - leading to a loss of fertility - but it can also allow the wind to blow away topsoil, too. This kind of erosion both reduces microbial activity in the soil - necessary for good soil health - but opens the bare soil up to weed seeds, too.

Intercropping, also known as companion planting, is the solution to this issue. It essentially requires you to plant multiple types of crops together. It can help protect the soil and also reduce soil evaporation, so your plants will have access to more water.

The soil will stay covered to protect diversity, prevent weed seeds from germination, and preserve soil quality, too.

You can find more information on intercropping as it relates specifically to tomatoes in this video.

All in all, intercropping will make your job as a gardener about ten times easier. That said, there are some plants that shouldn’t be intercropped with tomatoes.

Tomatoes are heavy feeders, so you don’t want to plant them with other heavy feeders, like spinach (lettuce is a better alternative since it doesn’t take up much space or nutrients).

12 Plants to Grow Under Tomato Plants

Growing herbs with your tomatoes is a smart choice. Many herbs not only require minimal space to grow (both in terms of height and root coverage) but they also are easy to care for. They won’t take a ton of nutrients from your soil and they won’t compete with your tomatoes for water, sunlight, or airflow, either.

Some of the best herbs to grow with your tomatoes include:

Many of these, like basil, can help to repel disease and insects, too. Some gardeners report that basil improves the growth and flavor of your tomatoes, too.

Just about any groundcover plant can be grown with tomatoes. Many of these are also herbs, like marjoram and oregano, but you can grow any plant that grows low to the ground with tomatoes. They won’t take up much space or compete for nutrients.

Grow leaf lettuce and other leafy greens (with the exception of spinach, a heavy feeder) beneath your tomatoes. Not only will the lettuce act as a living mulch to keep the soil cooler, but it can reduce the spread of disease in the garden, too.

Plus, lettuce likes to be kept cool, so growing it in the shadow of your tomatoes is a good way to extend the amount of time before it goes to seed, too.

Many people don’t think of growing beans next to or underneath their tomato plants, but it’s actually a smart choice.

Beans are not heavy nitrogen feeders, and instead, add nitrogen back to the soil. Tomatoes, on the other hand, consume heavy amounts of nitrogen.

Growing these two plants together is a smart choice that will maximize the space you have a labile. Choose bush beans instead of pole beans for the best results.

Radishes love the shade, so growing radishes under tomatoes is a smart choice. Your radishes will stay cool, which can prevent them from bolting.

Most root vegetables grow well in the shadow of tomatoes, too. Some good options include parsnips, carrots, beets, and rutabagas.

All of these crops grow best when they are exposed to soil that is high in phosphorus but not quite as high in nitrogen. When these root vegetables are provided with too much nitrogen, they produce bushy tops at the expense of their roots.

As a result, you’ll be left with small, inedible tubers.

Growing these crops beneath your tomatoes is a great way to ensure that they don’t receive too much nitrogen - but your tomatoes will love the nitrogen instead!

Flowers not only increase pollination from beneficial insects but also reduce the likelihood of pests being drawn to your tomatoes, too.

Similar Project:  11 Plants That Thrive in Shade and Dry Climates

The viola is another good choice. Violas don’t need a lot of sun and can be planted right inside the bed. Lavender, technically an herb, is a great choice, too. It forms a low-to-the-ground cover and doesn’t need a lot of nutrients or sunlight in order to be productive

One flower that many people don’t think of growing with tomatoes is the rose. Although roses can compete with tomatoes for space if both plants aren’t pruned properly, tomatoes can actually help roses in that they can protect them from a disease named black spot.

Onions are great to grow beneath tomatoes because they don’t take up a lot of space and produce minimal foliage. They won’t restrict airflow and they also don’t absorb too many of the nutrients in the soil that your tomatoes need.

Like onions, garlic also takes up minimal space and won’t compete much for nutrients. It can control late blight and also helps to repel red spider mites. Another benefit of growing garlic near tomatoes?

You’ll have everything you need growing together to make a homemade spaghetti sauce!

Amaranth is a grain crop that grows surprisingly well next to tomatoes. It can help repel insects and won’t compete for space or water.

Borage grows in a fashion similar to lettuce, so you can plant it beneath your tomato plants without having to worry about it competing for space or nutrients.

It can supposedly protect your plants from tomato hornworms, too. You can harvest the leaves young and enjoy them in salads.

Asparagus is another crop you can grow under your tomatoes, but you’ll have to be a bit careful about how you do it. Asparagus is a perennial, which means it will come back year after year.

Similar Project:  15 Secret Hiding Places That Will Fool Even the Smartest Burglar

You will just need to be mindful of where your plants are growing when you plant your tomato seedlings in the spring - that way, you won’t disturb the developing shoots.

Harvest the asparagus shoots young so they don’t interfere with the foliage of your tomatoes. Then, you can reap the many benefits of both.

Asparagus helps clear the soil of nematodes, which tend to be drawn to tomatoes, while tomatoes will help asparagus in return by getting rid of asparagus beetles. It’s a win-win for everyone!

How to Choose the Right Plants to Grow With Your Tomatoes

First, consider the amount of sunlight that reaches the soil around your tomato plants. Tomato plants can grow quite dense, so you may want to plant shade-loving plants close to the tomatoes and sun-loving plants further away.

Herbs grow particularly well close to tomatoes since they don’t require a lot of sunlight or nutrients, in most cases.

The kind of tomatoes may also influence the best plant to grow with your crop, too. Some tomato cultivars grow bushy and close to the ground, while others are tall and spindly. In most cases, you’re going to want to choose plants with sparse foliage, like carrots, instead of those that grow tall and bushy, like broccoli.

However, if you’re growing bushier types of tomatoes, then you’ll want to pick ground cover crops that stay low to the ground and don’t produce much tall foliage at all (herbs usually work well).

Remember to prune your tomatoes if you practice intercropping since you’ll still want to provide plenty of good airflows. Fertilizing, mulching, and weeding is also essential, as it is in any corner of your garden.

Growing a garden doesn’t have to be time-consuming. Work smarter, not harder - and consider growing these 12 plants under your tomatoes to increase your yield, protect your soil, and reduce your labors all at once.